Real-Time Brain Monitoring on a Cell Phone Over NeuroScale

Intheon CTO Christian Kothe is in San Diego wearing a 21-channel Neuroelectrics Enobio EEG cap. The data is streamed live through the NeuroScale platform where we are removing artifacts and computing a real-time map of cortical brain activity and brain network connectivity (multivariate Granger causality). The resulting data is streamed to San Francisco where Intheon CEO, Dr. Tim Mullen, visualizes Christian’s 3D brain maps in real-time on his cell phone.

Details on the analytic pipeline can be found in our IEEE Transactions on Biomedical Engineering paper here. To our knowledge, this is the first demonstration of such technology for real-time artifact rejection, functional brain mapping, and directed connectivity operating on a cell phone. Sign up for the NeuroScale beta at www.intheon.io and build your own next-gen brain-powered applications: anytime, anywhere!

The Latest News from Intheon 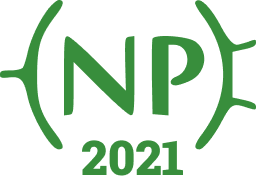 We are excited to see the announcement of 12 very compelling projects as this year’s finalists for the annual BCI Award.

The finalists will each deliver presentations on the 19th of October at the 2021 IEEE SMC conference and virtually via Zoom, after which the winners will be announced. Register for the virtual presentations with this link.

Intheon is proud to be a sponsor of the 2021 BCI Award and help recognize the innovative, hard work being contributed by researchers around the world, each helping make the world a better place through BCI technology!

Tim Mullen, Intheon CEO, gave the following presentation at the BRAIN Initiative Workshop: Transformative Non-Invasive Imaging Technologies, held March 9-11, 2011.  The goal of this workshop is to bring together neuroscientists, tool developers/engineers, and industry partners to discuss what new non-invasive functional imaging tools could be realized in the next five to ten years, their potential impact on human neuroscience research, and possible pathways forward for broader dissemination.

This month, we made our (virtual) pilgrimage again to the Transformative Technologies Conference, joining over 1000 founders, investors, venture philanthropists, venture capitalists, and other innovators in the wellness tech space.There, we joined on stage 30+ of the most respected thought leaders addressing society’s biggest and most complex problems across wellness, productivity, mental health, etc., from Google VP Ivy Ross to WIRED founder Jane Metcalfe, to brief innovators and investors on our latest advances and where we are heading over the next year. 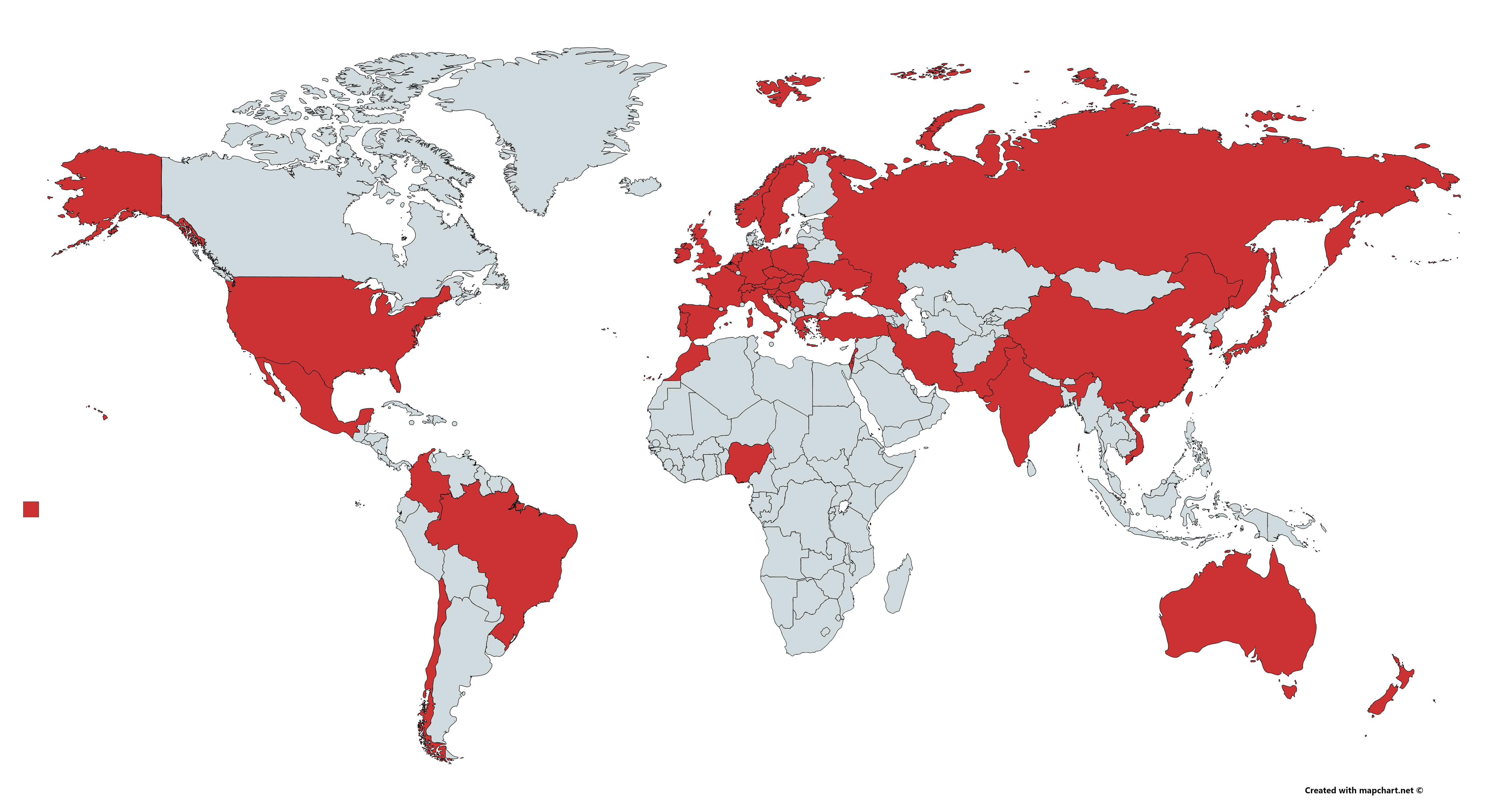 Neuropype Academic Edition around the world

The Neuropype Academic Edition is available free-of-charge for faculty and students at academic institutions, for use in non-commercial research. Ideal for hypothesis testing, real-time multi-modal signal processing and brain-computer interfacing, and recorded signal data analysis workflows. Apply today and turbocharge your research! (Multiple seat licenses for university labs available too!)

Working to fight COVID-19? Get a free Neuropype license.

If you're working on a project related to the fight against COVID-19 and could use a powerful tool for biosignal processing in your work, please contact us for a free Neuropype license. We already offer a free-of-charge Academic Edition license to faculty, students and researchers at academic institutions, so if you're one of those, you can already apply for a license today. However, we're extending the use of this free-of-charge license to those not at academic institutions but who are engaged in a project related to the global fight against COVID-19 and its impact.

With the 2020 Neuropype Release we're also excited to announce a new low-cost edition specifically for early-stage startups and/or personal use. This full-featured extensible edition of Neuropype is being made available to individual researchers, hackers/makers, and anyone with an interest in processing biosignals and creating realtime BCIs, as well as small companies with an annual revenue (or have raised funds) of $200K or less. Perfect for product R&D and/or BCI projects. 30-day free trial included!

We're delighted to announce the launch of the 2020 Neuropype Suite release. This major release includes nearly 50 new nodes, including a new node package, Gaze, with a collection of nodes for processing eye tracking signal data, as well as new nodes for removing artifacts, interpolating missing channels or missing data along an axis, spatio-spectral decomposition, CCA feature extraction, trial extraction based on trial metadata for ERP analysis, ...

At the 2019 Transformative Technologies Conference in Palo Alto, California, attendees were able to experience the multi-modal Avatar Experience, whereby they could fly around and through a 3D representation of their body and brain while visualizing their own brain and heart activity in a virtual avatar and control elements in that virtual world using only their mind, as well as receiving an auto-generated interactive report detailing changes in their neurocognitive states during the experience. 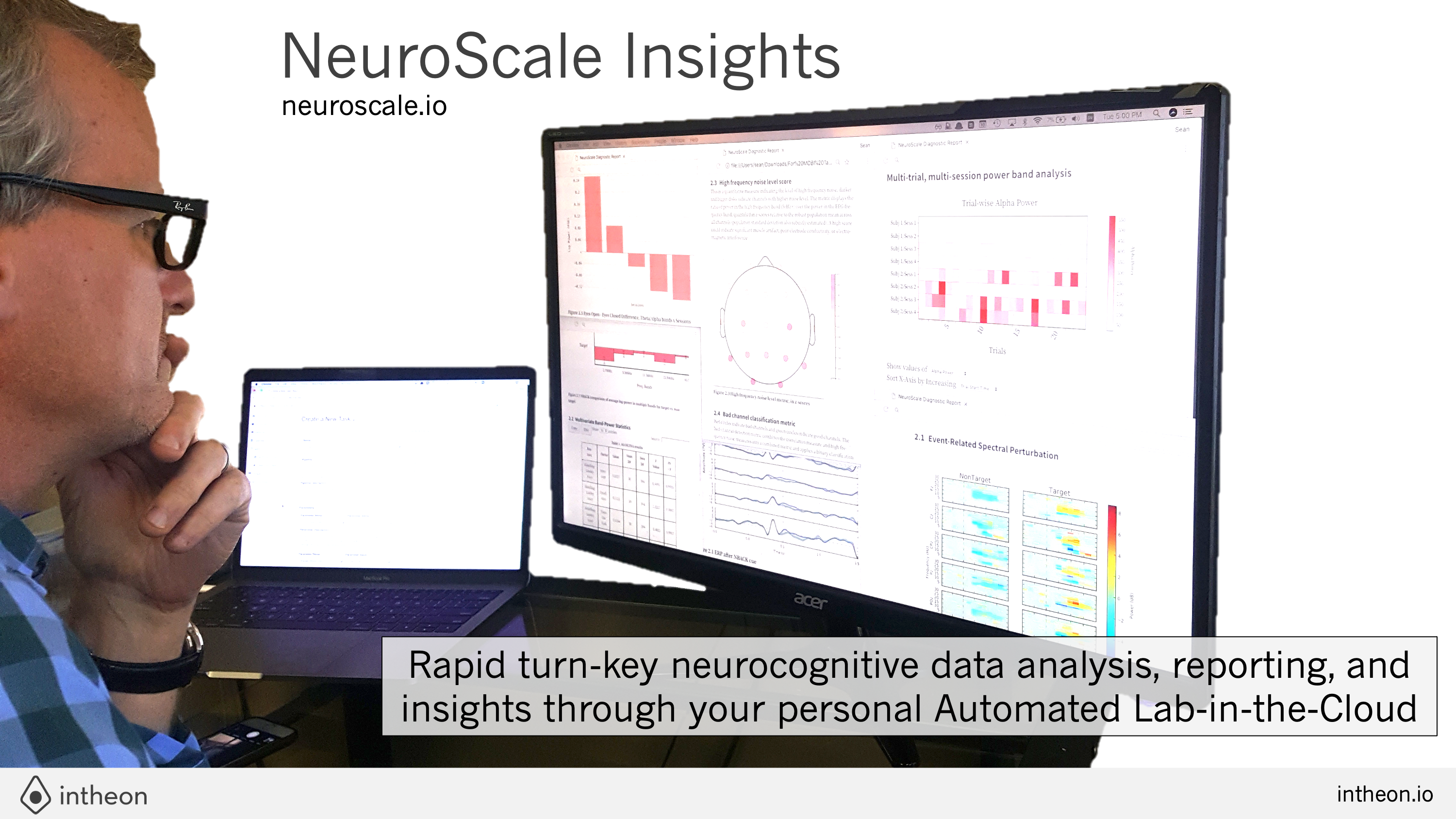 Intheon is excited to participate again in the Transformative Technologies Conference 2019, where we demonstrated new features of the Neuroscale Insights platform which, combined with our Experiment Recorder software running on Neuropype, enable commercial and academic research teams to easily collect and process biosignal data, select from a suite of customizable experimental tasks for cognitive state assessment, and automatically generate full-featured interactive graphical reports presenting a wide range of cognitive and neurophysiological metrics and statistical analyses. 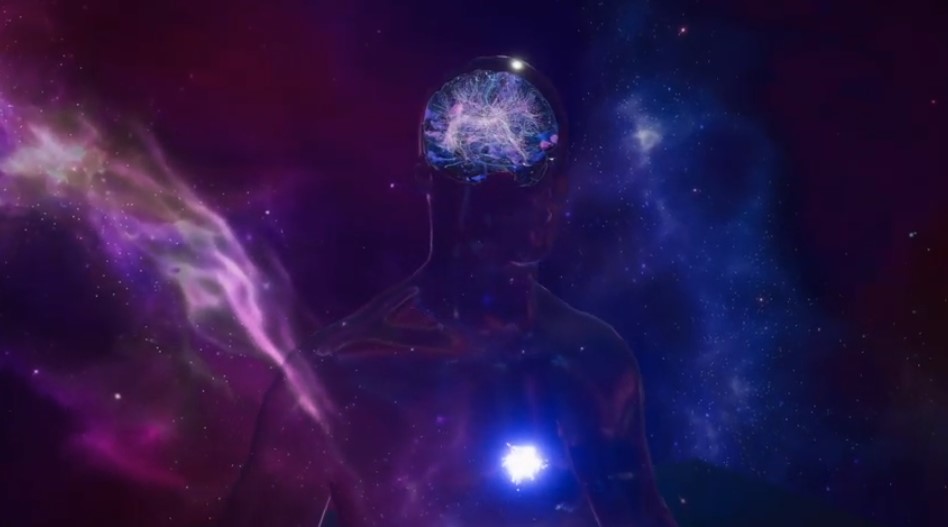 The BrainMind Summit held at Stanford University on October 12-13, 2019 included an Experiential Neurolab showcasing new inventions, technology demonstrations and artistic exhibits. Intheon was invited to showcase a new experience which allowed Summit attendees to experience their own brain and body states representated within a 3D avatar.

Congratulations to the prize winners of the 2019 BR41N.io BCI Hackathon at IEEE SMC in Bari, Italy! The prizes, including a $1000 cash prize from Intheon, were awarded to four diverse teams from a number of countries: 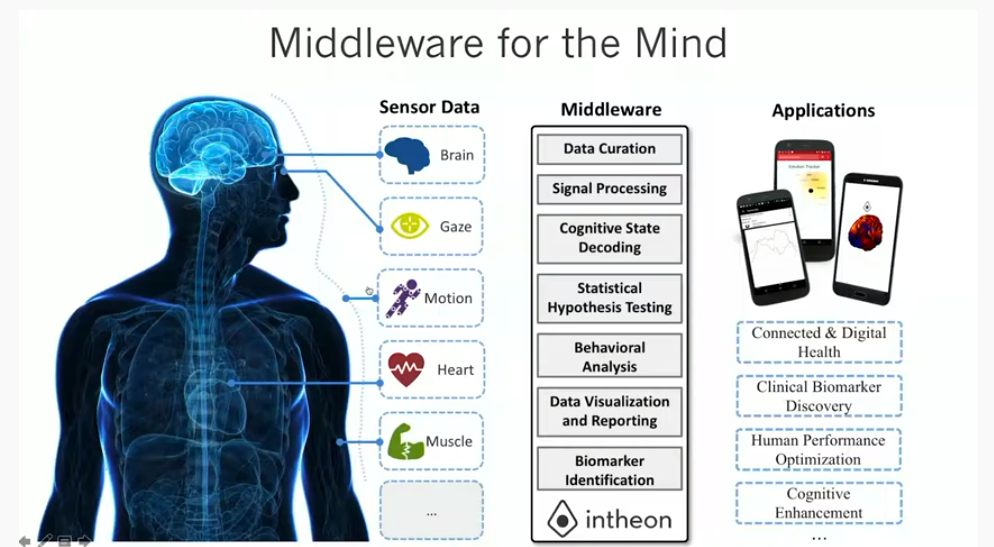 Intheon presents Middleware for the Mind at Brainmind Summit @ MIT

The BrainMind Summit hosted with MIT was held on May 4-5, 2019. Tim Mullen, Intheon CEO, gave a presentation which laid out Intheon's past, present and future, and how we are building Middleware for the Mind for both real-time and large-scale turnkey analysis and interpretation of data from a wide range of bio and neural sensor devices.

Watch the presentation below! 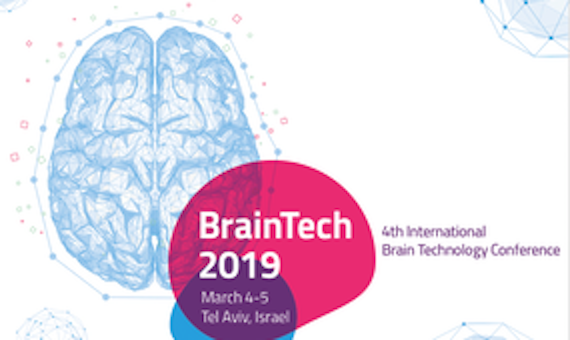 In March, Tim headed to Tel Aviv, Israel to give an invited presentation at Israel's premier international neurotechnology conference, BrainTech 2019, on "Closing the Chasm: Accelerating Translational Neuroscience Applications through Automated Biosignal Analysis in the Cloud".

Conversation with Allen Saakyan on the Simulation Series

At TTC'19, Tim sat down with Allen Saakyan from the awesome Simulation series for a conversation on Intheon's mission, the current and future state of neurotechnology; ethics, stewardship, and governance in exponential technologies; views on consciousness, and related topics. Check out the interview here.

Presenting & hosting workshops at the EEGLAB 2018 Workshop held at UCSD

We were delighted to participate in presenting at and/or hosting several sessions and workshops at the EEGLAB 2018 Workshop organized by the Swartz Center for Computational Neuroscience at the University of California San Diego on November 8-12.

Intheon gave an invited presentation at the Transformative Technologies Conference held on November 9 - 10, 2018 in Palo Alto, California, where we showed how Neuropype and Neuroscale can help individuals and organizations accelerate their neuroscience and neurotech R&D through rapid testing and iteration using these powerful biosignal processing and state decoding tools.

In addition to presenting several papers at the IEEE International Conferences on Systems, Man and Cybernetics (SMC) 2018 in Miyazaki, Japan, held on October 7-10, Intheon is proud to be a sponsor of the Brain-Computer Interface (BCI) Hackathon at the conference.

Dr. Tim Mullen talks about the future of neurotechnology at TEDxSanDiego: Revelations

On July 28 Dr. Tim Mullen (CEO, Intheon) gave a talk at a TED Salon, hosted at the Salk Institute for Biological Studies, where he spoke about a future in which advanced neurotechnology is woven into the fabric of everyday life, a natural extension of Marc Weiser's (CTO, Xerox PARC) concept of "ubiquitous computing".

We are excited to be participating in this year's ISS R&D Conference!

We'll be presenting recent research, in collaboration with the UND/NASA Human Spaceflight Laboratory, Fordham University, and Cognionics, evaluating new capabilities for assessing crewmember neural and cognitive performance during a 14-day simulated Lunar/Martian mission in the Inflatable Lunar/Martian Habitat Analog at the University of North Dakota. 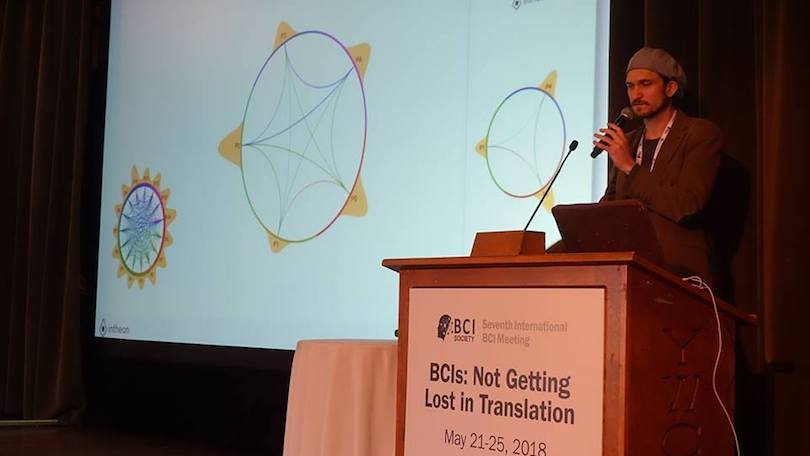 Intheon gave several presentations at the 7th International BCI Meeting, held in Asilomar, California, on May 21-25. In one of these,  "From N=1 to N=Everyone: Scalable Technologies for Multi-Brain Computer Interfacing", Tim Mullen gave a live demonstration of a "hyperbrain": real-time computation of neural synchrony across groups of individuals, all done with mobile devices and NeuroScale.

We're excited to participate with the Human Spaceflight Laboratory at the University of North Dakota, Fordham University, and Cognionics, on a research project for Inflatable Lunar Martian Analog Habitat Mission V, testing the feasibility of using wearable EEG and specially designed cognitive assessment protocols to characterize and predict future changes in cognitive performance during Lunar/Martian missions.

Intheon was invited to be a Featured Beta Startup at the Collision tech conference held in New Orleans on May 1-3, where we showcased our NeuroPype desktop signal processing application and previewed the capabilities of our NeuroScale cloud platform. We received a lot of positive feedback and excitement from attendees about what we have been building and have in the works as we pioneer the first cloud-scalable platform for 'anytime, anywhere' neural state decoding! 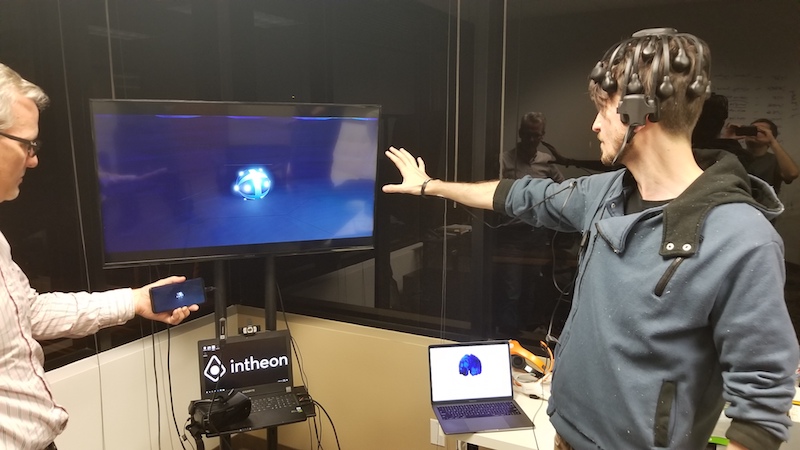 EEG/EMG/ECG-powered VR app over the cloud with NeuroScale

Having fun at the Intheon offices with a GearVR-capable application showing integration of heart, muscle/gesture, and cortically localized brain activity, processed in the cloud with NeuroScale, and powering an interactive mobile VR game rendered on a phone. While wearing a Cognionics Quick-30 headset for measuring EEG, EMG and ECG signals, we took turns activating or deactivating the orb using EMG, while levitating the orb with our EEG activity by focusing our attention. (Game dev by Tim Omernick.) One more step towards "anytime, anywhere" BCI applications! (click Read More to see video) 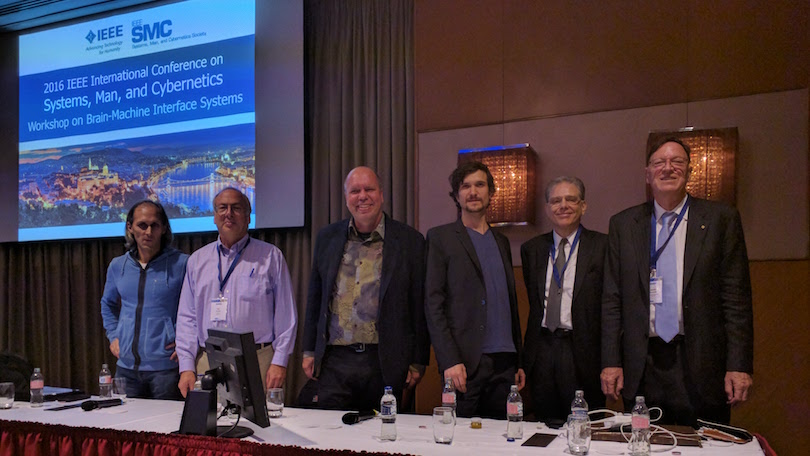 Our CEO, Tim Mullen recently gave an invited Keynote talk discussing our mission to power the future of "anytime, anywhere" neurotechnology, at the Founders Keynote Session of the IEEE Systems, Man, and Cybernetics conference in Budapest, Hungary.

First demonstration of Real-Time Brain Mapping in a Web Browser 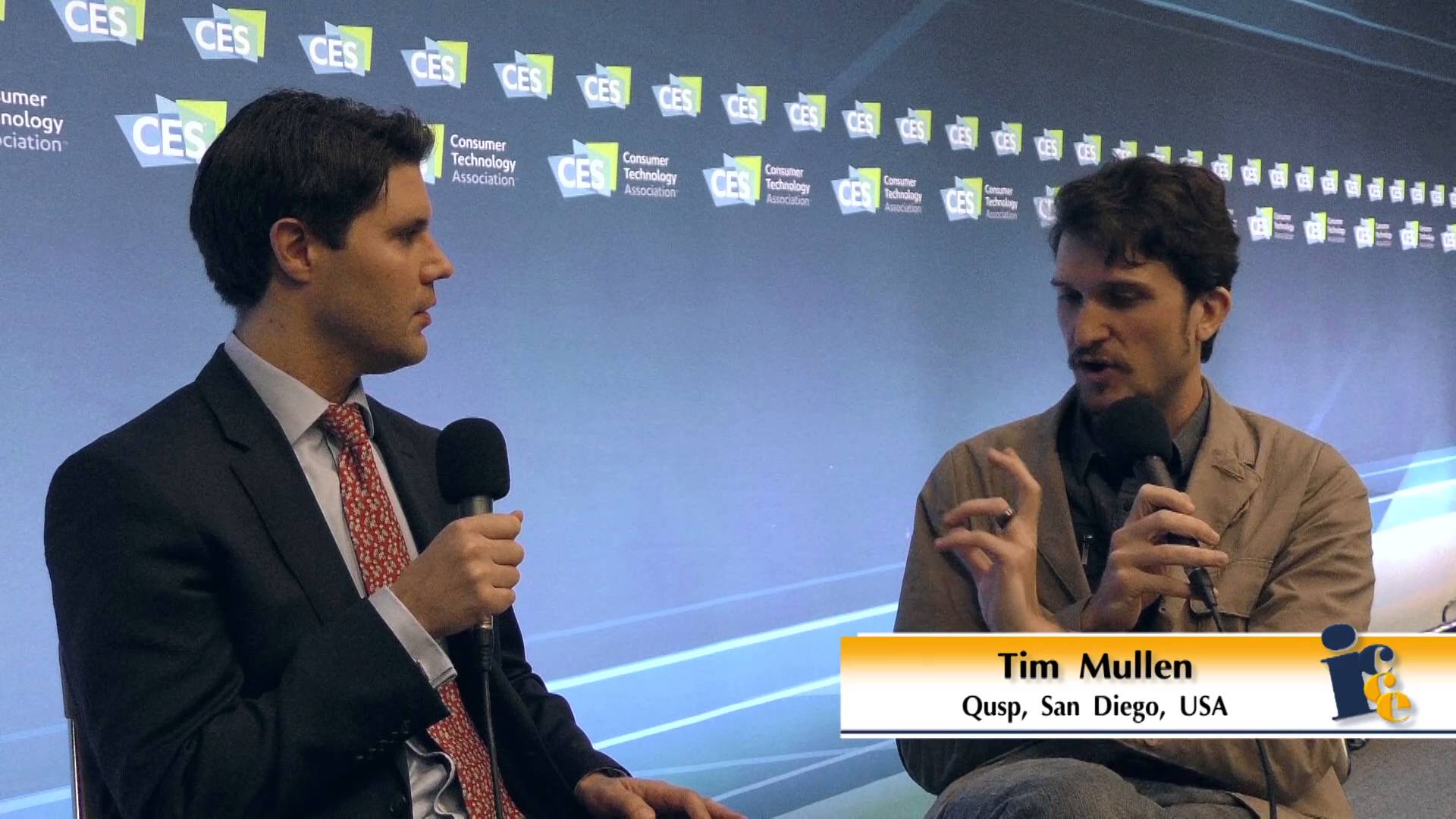 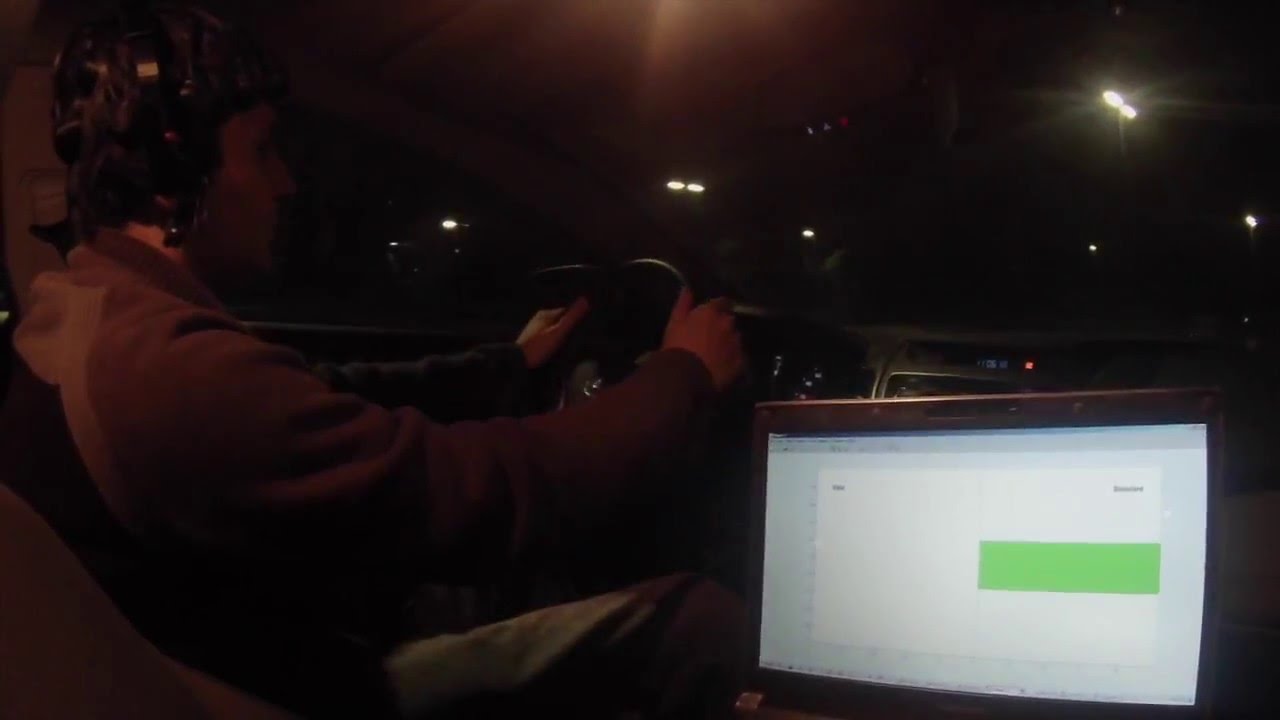 This video demonstrates a real-time wearable brain-computer interface (BCI) capable of detecting whether a car driver (here, Intheon CDO Nima Bigdely Shamlo) heard an unusual sound interspersed amongst regular sounds played over the car speakers. The is the first demonstration of a real-time, dry wireless EEG BCI system operating in a moving vehicle with real-time computation on the cloud (NeuroScale). 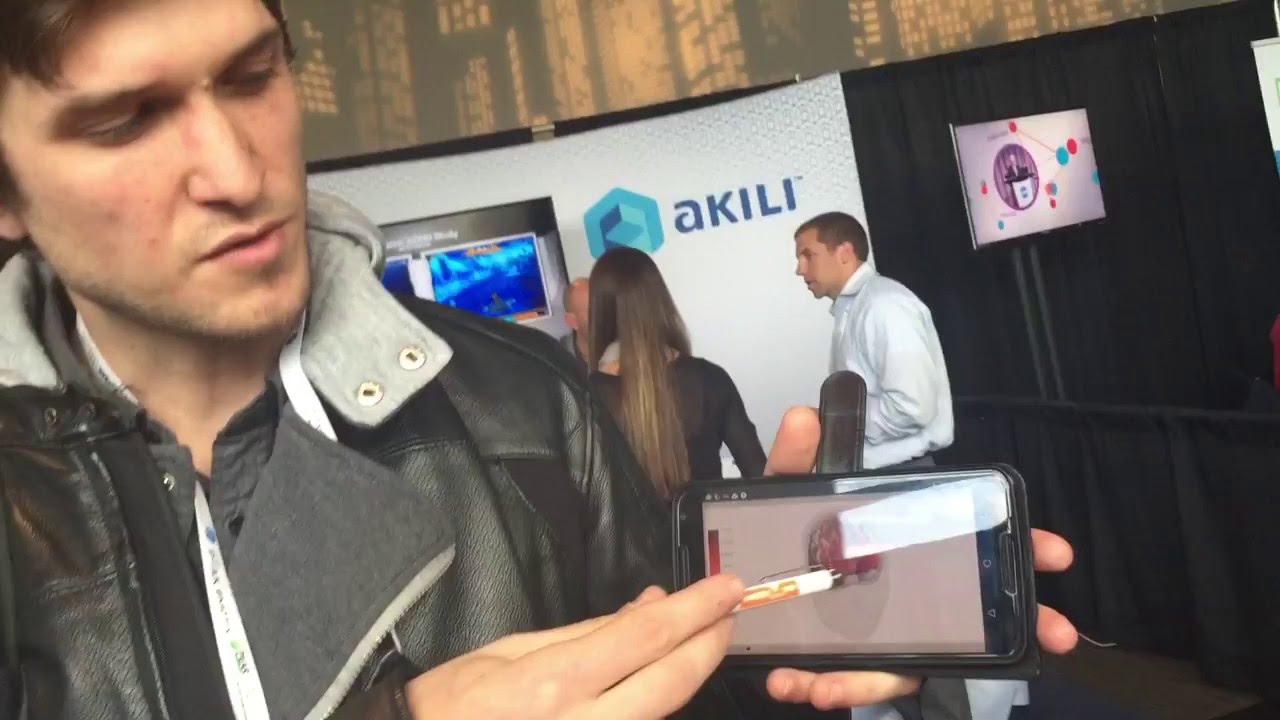 Real-Time Brain Monitoring on a Cell Phone Over NeuroScale

Intheon CTO Christian Kothe is in San Diego wearing a 21-channel Neuroelectrics Enobio EEG cap. The data is streamed live through the NeuroScale platform where we are removing artifacts and computing a real-time map of cortical brain activity and brain network connectivity (multivariate Granger causality). The resulting data is streamed to San Francisco where Intheon CEO, Dr. Tim Mullen, visualizes Christian’s 3D brain maps in real-time on his cell phone.

Here we show how a brain-computer interface — here a multiplayer, mobile brain-controlled game (“neurogame”) called Tractor Beam — can be powered by the NeuroScale cloud platform and used on planes and trains (or anywhere else you have Internet). Here Intheon team members (Mullen, McCoy, Bigdely-Shamlo, Ward) were on their way from San Diego to San Francisco, on May 5th 2015, to present at the NeuroGaming conference. 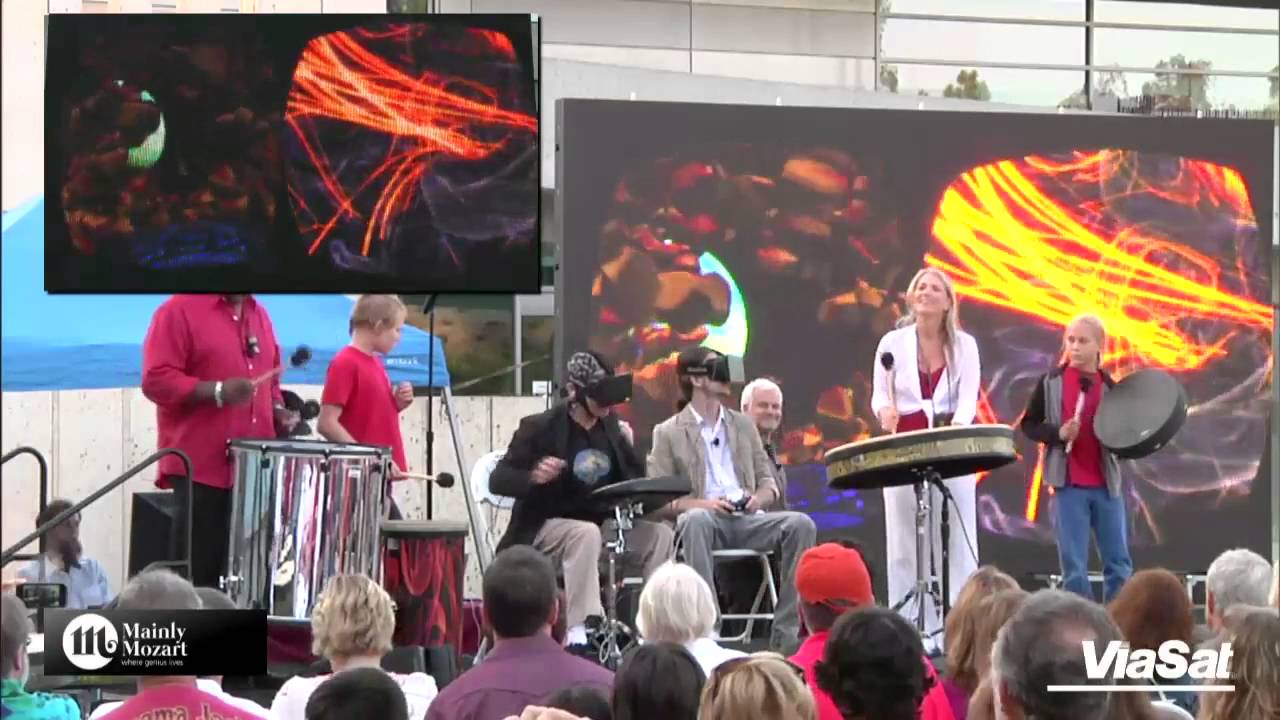